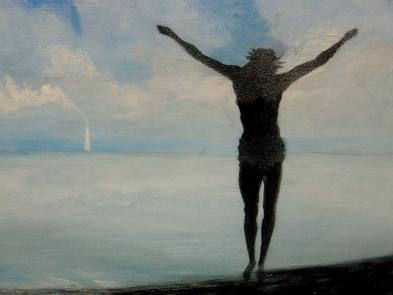 There’s a silhouette of a Christ that appears constantly in Ricardo Santos Hernández’ oeuvre; the outline awakens uncertainty, but also serenity; it disturbs yet makes one contemplate. It’s imaginary to attempt to unattached the outline of that image with the one covered with blood upon a wooden cross. And while I think about the Christian metaphor, how can I not evoke the verses from the poem by Borges: “Cristo en la cruz”: ¿De qué puede servirme que aquel hombre / haya sufrido, si yo sufro hoy?”

The following questions can no longer be evaded: What is the cause of the suffering of present day human beings? What afflicts them?, or is it just emptiness filled up by the entertainment world that has gulped down the spectator such as Polyphemus devoured Odysseus’ soldiers? The figure of Christ by Santos does not pretend to sermonize; it is a leitmotif that disturbs within its beauty.

Ricardo Santos Hernández remembers that he has always shown talent with his hands. Since he was a child, he could put together artifacts and draw figurines, but he never suspected he would one day become an artist. Art was simply a medium to escape the suffocating reality that he was living in Nogales, Sonora which borders the state of Arizona. His father is a Yaqui (he was born in a town in the region by the Yaqui River), and his mother was born in California whose parents came from the Mexican state of Jalisco. Ricardo grew up with the nurture and stigma of the Yaqui culture as well as certain Catholic habits passed on by his mother. He grew up on the border, under the repression and intransigence against the Yaqui people. Consequently, he ventured to leave his town, letting himself be devoured by the promising and frivolous world of a university. Santos wanted to stop his cultural continuity in order to fill his void, but with other emptiness. Yet when he got far away from himself, he also got away from everyone else. While his identity formed, by deforming itself, he graduated as a teacher in Arizona, then moved to Texas to practice his profession.

Once in Laredo, Texas, he began to scribble drawings, to play with colors in his sketchpads. The desert, the flora and fauna of his native land began to inhabit his imagination and his notebooks. Without planning it, his internal peace was
coming back to him via his artistic creations; not in the affliction or the violence of color, but in the modesty of a sketch. After teaching for a decade, he enrolled at the University of Texas at Austin to study art. No longer an adolescent, Santos arrived at the Windy City with a bachelor’s degree, ready to get his masters at the Art Institute of Chicago. Each time he moved, Santos enhanced his artwork. The metropolis has given him more than pictorial subjects; in his canvasses one can find the traces of his journeys, as well as how he has been introducing certain iconography that embodies the contemporary man and his surroundings. 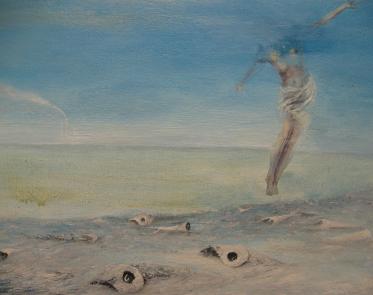 Years ago, Santos had a studio on 18th Street in Pilsen. It was on the fourth floor of the APO building, and from there he could see the rusty ceilings. And in the cloudy days—which aren’t a few in Chicago—one could see another murky cloud that came out of the mouth of the Fisk carbon plant. This chimney emitted contaminating smoke constantly and it became the leitmotif in his work. Without decontextualize the motif, his icon was no longer part of Pilsen, but instead it was reincarnated in one after another and another of his paintings. The context changed, but the message remained the same: The damage inflicted by a human being upon another being and upon the environment. After more than two millenniums, Plautus’s maximum has not lost validity: Homo homini lupus est (man is a wolf to [his fellow] man).

Some of Santos’s paintings could be described as catastrophic, fatalistic and apologetic of the chaos they portray; perhaps, but there is much more. Santos’s drawings are remarkable. While in the academy, Santos learned to correct a line, to add the necessary volumes to his pieces, enrich textures. And he also became enraptured by art history. But once he mastered drawing skills, he began to destroy the cleanness of the lines, he dirty them. In art just like in creation there is no perfection, there’s freedom, rebellion, provocation. So after the academy he continued frequenting those insurgent spirits that painted against the established canon such as: Boch, El Greco, as well as Francis Bacon and Siqueiros, and most recently Francesco Clemente and Sandro Chía. Therefore, Santos chose their route. He is a serene artist: The lights dazzle him. But in his studio he unleashes the demons in his drawings as well as in his paintings and installations, where the artist internal rebellion remains.

Santos is not interested in reproducing the world as it is. The environment that Santos reinvents is the one that the everyday viewer refuses to see. Like Alberto Caeiro in the “Guardador de rebaños,” Santos lowered Jesus from the timber and proceeded to humanize him once again. Santos’s Christ is a Jesus whom falls into Lake Michigan amidst sky-blue and pearl colors. And in the back we can barely perceive those chimneys that are constantly spitting out mouthfuls of smoke. 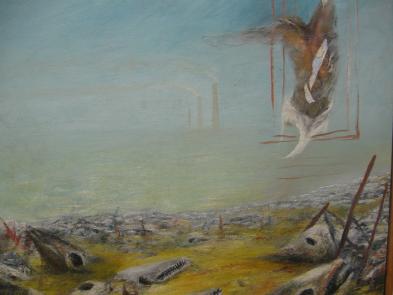 Santos, who is a believer, has his doubts every day. His Christ is personified in doubt. Since he has lost faith in mankind, he has retaken this millennial metaphor. What would Jesus do if he came back and walked amongst us? How would He react when he set foot on that devastated Persia that accumulates more than half a million deaths thanks to the avarice of those corporations that control the oil? Would the feet of this Christ touch Lake Michigan which supplies water to more than seven million people and which has been contaminated by the oil spill of British Petroleum? Would He dare to cross the Arizona desert where millions of immigrants have died while crossing the border while fleeing from the violence and hunger of a convalescent México?

The Christ of Santos is a painting that has been carried out with skill, but also with a fatalistic allegory. Perhaps the hope of humanity lies in this biblical parable? And if this is the case, who understands and who embraces it? In the work of Ricardo Santos Hernández, this faith turns useless, but the painting as revelation of the spirit offers us an exit.